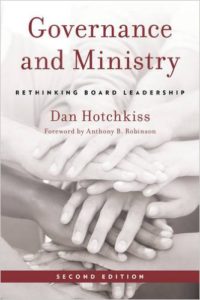 [box]We are excited to offer the following excerpt from Governance and Ministry, 2d edition, which will be published January 20, 2016.[/box]

Building a healthy partnership—negotiating roles, addressing misbehavior, setting and achieving goals—is hard work that requires an atmosphere of trust. Firm boundaries and self-differentiation—knowing who I am and how I feel while keeping lines of communication open—are essential for a healthy partnership.

Some clergy and lay leaders like to divide authority up into watertight compartments, so they don’t have to engage in give and take. Clergy who take their authority over worship as a license to persist doggedly in the style they happen to prefer, volunteers who take advantage of the congregation’s gratitude to treat positions of trust as if they were personal property, staff who refuse to be evaluated, and boards that insist on inappropriately punitive or quantitative systems of evaluation are all erecting rigid boundaries around themselves. Such rigid, unilateral approaches rarely achieve the hoped-for outcomes.

Rigid boundaries are an early warning sign of conflict. A simple way to think about the conflict level in a congregation is to map the relationships among the leaders. When the boundary between two leaders becomes rigid, they stop talking with each other except “officially” at meetings and stop checking in with one another informally. They may need encouragement to listen to each other—starting with noncontroversial topics—as a way of softening their boundary.

One reason people erect rigid boundaries is to protect themselves by blocking the flow of potentially painful information. When you’ve staked out a contentious position, you have reason to expect that others will reciprocate. Unfortunately, setting up a rigid boundary cuts the phone line. Without the chance to receive information or feedback from others, rigid boundaries make it impossible to learn, adjust, or even to persuade others.

Forty years ago, it was quite common to hear clergy and lay leaders defend rigid boundaries on principle. In those days, claiming you knew your job and didn’t need advice about it was much more acceptable. Today most leaders espouse mutual goal-setting and evaluation as “best practices” —even when their actual practice is never to find time for them. In the meantime, the reverse mistake—defending fuzzy boundaries—has become more common.

In too many congregations, leaders actually believe that partnership works best when boundaries of authority are fuzzy. Terms like shared leadership have become popular in recent decades, for reasons some of which are understandable and sound. Traditional modes of congregational life, where men dominated women, clergy dominated laity, and wealthy people dominated everybody, have fallen out of sync with the egalitarian principles, not only of congregations but also of society at large.

In industry, for instance, top-down styles of management have lost favor (at least in theory) to an emphasis on teams and group decision-making. In a team-oriented company, team members have a voice in shaping their own work. There’s nothing fuzzy about that, especially when, in business, participative management takes place against a background of nearly absolute executive authority. A collaborative approach helps managers to make decisions that reflect the insights of a wider circle, including workers, engineers, and customers—without blurring ultimate accountability. When a person who works in such a setting joins a congregation, he or she expects to have a voice there, too.

But the authority of clergy leaders to manage—much less to innovate or make big changes—has in many relatively liberal congregations almost vanished in favor of vague notions of shared leadership. As a result, congregations that once suffered from a lack of lay participation now suffer from lack of anyone who can decide on a direction, align resources, and take action. In that context, empowering volunteers at every level to participate in making every decision only makes a fuzzy allocation of authority worse.

The result is sometimes painfully ironic. In congregations, one of the best fruits of the egalitarian trend, starting in the 1970s and 1980s, has been an increased willingness to ordain women. But as women started to accept positions of authority, they sometimes found that the authority had largely vanished out of the positions. Old stereotypes about women’s “natural” abilities —their supposed lack of leadership potential, courage, and math skills, for example—reinforced similar stereotypes about the clergy. Lay leaders, who have long been a bit skeptical about the manliness of clergymen, sometimes step in to take paternal care of clergy—male and female—to protect us from our own gentle, nurturing, naïve selves. Like a couple in a 1950s television marriage, clergy and lay leaders in too many congregations collude in limiting their own and one another’s growth by idealizing and exaggerating supposed differences of personality and skill.

Congregations have become more democratic and egalitarian, which is good. In the process, however, many have become too anxiously preoccupied with hearing everyone and too committed to offending no one, which is not good. As a result, they never seem to choose a goal, much less empower anyone to stir things up—with serious consequences for their partnerships with clergy. Boards and clergy leaders need to make a choice. Is the purpose of the congregation to keep people happy, or is it to achieve a larger mission? Only with the mission in the driver’s seat will lay and clergy leaders work together to identify the short- and long-term results the mission calls for and then put the clergy leader in the hot seat, where it is more comfortable to act than not to act. Then, and only then, will clergy and lay leaders, knowing that change always brings about resistance, have each other’s back.

The way to move beyond old, unjust ways of allocating power is not to pretend there is no power to allocate nor to allocate it so unclearly that no one feels responsible for taking action. A congregation that truly cares about participation needs a board that leads an open process of discerning mission and selecting strategies. And it needs empowered ministry leaders who accept responsibility for achieving well-defined results. Joined in a common purpose, the partners compensate for one another’s shortcomings without needing to invade each other’s space. And over time, trust grows.

Leaders can stay self-differentiated more easily when the boundaries of authority are firm—firm about which decisions the board makes and which it delegates; firm about who leads the staff and with what authority; and firm, for every category of decisions, about who leads the process, who must be consulted, who finally decides, and who takes charge of implementing the decision. When everybody knows which buck stops where, no one needs to hide information or defend turf. People actually can move closer to each other when they don’t have to worry about losing power if they enter into give and take. This principle applies to partnerships of all kinds, including partnerships of lay and clergy leaders. When it is clear where each buck stops and who will bear each cross, daily interactions can be more relaxed and flexible than when roles need to be negotiated every day.

From Governance and Ministry: Rethinking Board Leadership, 2d edition, by Dan Hotchkiss. Copyright © 2016 Rowman & Littlefield. Used by arrangement with the publisher. All rights reserved. No part of this excerpt may be reproduced or printed without permission in writing from the publisher.