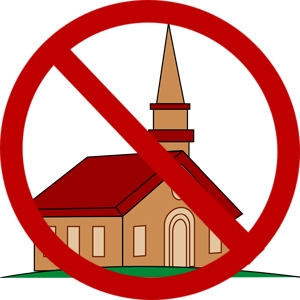 This question—Is a congregation still a church in any meaningful way?—comes up more often than church members might think, usually in a setting that anticipates a negative response. I surprised myself yesterday by deciding I could trust God to figure out the answer!

I don’t usually decide to trust God (to which I can hear some of you thinking, “That explains a lot!”). In fact, the last time I decided to trust God with a knotty problem was 18 years ago when I decided I would have to trust God (and my son) to figure how to deal with the fact that Chris wouldn’t do his homework. (He’s now a graduate student in public policy.)

This time, I was wrestling with “Is it still a church,” a question I encountered for the first time decades ago as a newcomer to Committee on Ministry work. A congregation to which I’d been assigned had been described by a fellow committee member as being “a card club, not a church.” By this he seemed to mean they met only for coffee and cards, and not for anything that looked or felt like church.

Is it still a church?

For those of you who haven’t thought about it before, this is a theological question – What constitutes “church?” But it is behavior, not theology, that usually causes someone to raise the question. For example:

Is a congregation still a church if there are only eight people in worship?

Is it still a church if it no longer has a governing board because half the members, including all but one board member, left in a huff? (For some denominations, the answer may be clear: If there are no meetings of the governing board and no minutes of the meetings, there may technically be no church.)

Is it still a church if there’s no pastor, only different pulpit supplies each week, with no guarantee of preaching skill or hermeneutical adequacy?

What if there’s communion once a month but no one ever thinks to take it to the shut-ins?

What if everyone gathers for coffee prior to worship (just coffee, no Bible study or prayer) and no one notices it’s time for church until the frustrated pianist draws their attention to the sanctuary with his loudest circus music?

What if no dollars are being spent on anything other than the building and the weekly preachers?

In other words, if all that’s left is a building and a small group of folks who gather once a week to sit and chat, is it still a church?

The two people with whom I was talking yesterday about this particular church both seemed to think not. In fact, one of them, while concurring that this congregation was not a church, said that her congregation, which was, according to her, exactly the same—a social club maintaining a building—also did good works in the community, so they were still a church. To which I wanted to say, “So does my Rotary do good works, often the very same good works, and nobody would ever think to claim it is a church.”

In fact, what I really wanted to do, because I like to make sweeping pronouncements, is move beyond this small group of people into a broader discussion of who is and isn’t church:

However, I took a deep breath, thought again, and was forced to conclude that God is probably not as burned out about the whole church thing as I am.

None of us truly knows what constitutes “church” because none of us knows the mind of God. But I feel sure that, to the extent any of us can say that a divine Being intended “church,” the intent probably involved communion with the divine and with each other. This irks me, because I’d rather be by myself—but smart people keep telling me that humans were created to be in community, and Scripture suggests that this community includes the divine, even though sometimes hidden. I suspect that God has not given up on communion.

And if Scripture is any guide, I feel sure that church was intended to be a place to learn—to learn that God is merciful and gracious, slow to anger and abounding in steadfast love, and to learn that God requires of us not just love but also justice. This kind of knowledge is not obvious, so it helps to have a church in which to learn.

Most importantly, though, where I may see hypocrisy of indifference or a few people taking up space, I suspect that God also sees the one person in the crowd who longs to live “in Christ. I suspect that God sees the heart ready to wrestle with God in order to be changed or the mind desperate for something new. God sees, as Phyllis Tickle once said to a class, “the flicker of a silver fish in a dark pond.”

That longing, that heart, that flash of light in darkness, is the church, and I am willing to trust God that it still exists.

[box]<a href=”https://www.congregationalconsulting.org/sarai-rice”>Sarai Rice</a> consults with congregations on a variety of issues including planning, program development, and governance, and offers coaching for clergy and lay leaders. She has a passion for work across the lines of faith traditions, especially in areas involving community ministry and social justice, as well as a deep commitment to the notion that human institutions should work well for the people they serve.[/box]