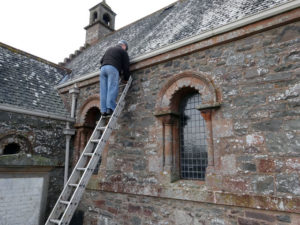 Recently I’m working on a pair of projects on opposite ends of the congregational survival spectrum. One project is a survey of the vulnerability of Philadelphia’s “sacred places.” The other is a freelance writing gig for Association Reserves, a company that does “capital plans” for various nonprofits, including congregations. The Philadelphia project is about the ever-looming threat of congregational closure. A capital plan is all about sustainability and thriving. Sometimes the contrast makes me dizzy!

In Philadelphia, I am awed by the heroic way so many congregations and their leaders strain to keep their ancient buildings upright. With Association Reserves, I’m learning from religious groups, including congregations, that are thriving. A capital plan helps leaders to project the true cost of property ownership, so they can ask donors to fund needed maintenance in advance.

Few congregations fund their maintenance reserves even close to the level pros would recommend. Many would find a full accounting of their building costs demoralizing, rather than encouraging. Still, I want to share what I am learning about capital plans. Even if the goal of fully-funded maintenance is far away, it helps to know what it would look like.

The capital planning concept is simple. An architect explained it to me this way: “You have to pay for a building about every thirty years. You can tear it down and literally rebuild it—that’s the expensive way. Or if you replace parts of the building as they wear out, it can last forever.”

Neither way is free. Each year, the burden of deferred maintenance increases like a hidden mortgage. In some years, the direct cost of property maintenance may be small. In others—when a roof or furnace needs replacing—it may be large. Capital planning is a way to spread that cost evenly across years.

Most leaders understand the concept, and most boards talk about deferred maintenance. A capital plan helps leaders move from general expressions of concern to precise estimates of costs and concrete plans for how to fund them.

Components and their costs

A capital planning specialist looks at each part of your building and outdoor facilities like parking lots and sidewalks. For each component, the plan includes an estimate of total useful life, how many years before it needs to be replaced or renovated, and the expected cost. From this information, the planner calculates how much needs to be put in reserve to fund the item.

The capital plan might say (based on board decisions) that rooms should be repainted every 15 years, and carpets replaced after five. A furnace might have a 30-year lifespan, a copying machine 10. You don’t replace something that does not need it just because its estimated time is up, but when the time comes, the money will be there. All estimates should be updated every several years.

The professionals at Association Reserve (which got its name from doing something similar for condo associations) walk through the property, bit by tedious bit, estimating costs and useful lives for each component. The grand total recommended reserve amount can be daunting, and is generally far more than congregations put away, left to themselves.

By comparing the grand total of the reserve amounts in the plan with the actual balance in the fund, the board knows how much it needs to add each fiscal year. Often there is a catch-up period leading to full funding.

“Ha!”, you’re probably thinking. “At that point hell will have frozen over anyway, relieving us of quite a bit of work.” I understand. Most congregations are happy to be debt-free ten years after they build, without even thinking about putting hundreds of thousands, even millions, into a reserve fund.

Such congregations often have a not-so-secret plan for maintenance, which is wait for an emergency and then hold a capital fund drive. There is a grain of wisdom in this. Capital-fund money usually is easier to raise, dollar for dollar, than operating money. Why not pay for maintenance the easy way?

The trouble with this reasoning is that people like to give capital gifts for visible projects like new buildings. Routine maintenance—replacing rugs, roofs, paint and plumbing—is less sexy. You can fold some of it into a capital-fund program, but it’s usually not a big draw on its own. Routine maintenance is best funded in a routine way, by socking operating money into a reserve fund earmarked for the purpose. Donors who get excited about maintenance (and there are some!) can give to the fund directly, or to specific projects that the fund supports.

So far I like the people at Association Reserves. If you’re in the market for a professional capital plan, I hope you’ll get in touch with them. If the cost is too much for you to consider, you can download a sample capital plan that shows how it is done. An ad-hoc committee, working with a friendly local contractor, could probably create a better-than-nothing plan themselves.

Many congregations—including vulnerable ones in Philadelphia and elsewhere—will not see any possibility of funding maintenance reserves from operating money. But knowledge of the true cost of building ownership can help anyway, as boards decide how much space to keep or sell, and how much to charge building users.

The sacred places we inherit—often built by ancestors in a very different era—are assets that carry with them the phantom liability of future maintenance costs. A capital plan sheds needed light onto that phantom so that leaders can think clearly about how to be good stewards of the places in their care.