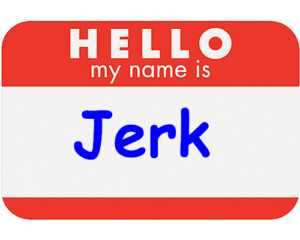 Most congregations have at least one jerk. You know who I mean—the one who takes up far more than one person’s share of time and energy and leaves the group feeling discouraged, disempowered, and exhausted. The jerk is the person who:

I run into jerks all the time because I’m often hired by congregations that hope a new strategic plan or a governance structure will give them the tools and clarity of purpose to deal with their particular jerk.

If you have a jerk, I suggest books like The No Asshole Rule by Robert Sutton and its soon-to-be released companion volume, The Asshole Survival Guide. (My favorite advice: Learn “when and how to simply not give a damn.” Or as Sutton quotes Walt Whitman, “Dismiss whatever insults your soul.”)

I am not writing today about how to deal with the jerk across the table from you. Instead I want to talk to those of you who are jerks, because my not-so-secret secret is that I’m one of you.

Yes, I can be a jerk. I sometimes come to the meeting already angry. I expect incompetence, though nothing upsets me more. I am not especially suspicious of new thoughts—but I am often suspicious of your thoughts. The older I get, the more likely I am to leap to judgment and reveal it in my facial expressions. (Tip: If I roll my eyes, I think you’re an idiot.)

I could try to justify myself by saying the fault is in my genes, or the increasingly demented and high-stress society we live in, or the lack of ocean access here in central Iowa. But I’m not going to try. The bottom line is that I can be a jerk. However, I don’t want to be one anymore, and I’m guessing you don’t, either. So I propose we write some new rules:

The world is in turmoil, and I have concluded that my being a jerk does not improve it. It is time for all of us to embrace a more gracious nature.