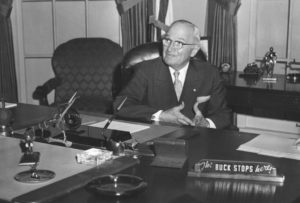 A famous sign on Harry Truman’s desk declared, THE BUCK STOPS HERE. “The President—whoever he is,” Truman explained, “has to decide.” Truman’s example has inspired many leaders to accept appropriate responsibility. But a careless reading of his slogan can lead to the mistake of thinking that whoever can make a decision always should.

Truman surely understood this. As an artillery captain in the First World War, he made a name for himself by making corporals and sergeants responsible for discipline and promising to demote them if they failed. “I didn’t come here to get along with you,” he said. “You’ve got to get along with me.”

Truman accepted final responsibility, but holding a sergeant accountable for the conduct of his soldiers meant insisting that a multitude of bucks stop short of the captain’s desk. Willingness to accept final responsibility is not the same as making all of the decisions. In fact, effective leaders must refuse to make decisions once they have delegated them to others. Otherwise they undermine the goal of delegating in the first place, which is to get others to make good decisions on their own.

Congregational decision-making suffers from a lack of clarity about what buck should stop where. Governing boards, committees, staff members, and volunteers make oddly small decisions alongside large ones, tediously redo each other’s work, and endlessly revisit work already done by staff and volunteers. Topics that were seemingly resolved crop up again at staff meetings, in committees, and at coffee hour. Pastors, volunteers, and staff, unsure of their authority, spend a great deal of time preparing to request permission to spend money, move furniture, or make changes to programs and procedures—even when these actions are clearly pertinent to goals already approved. So let’s take a closer look at what delegation is and how it can be done well.

So long as the implicit purpose of a mainline Protestant church was to occupy a franchise on a main street to collect whatever Presbyterians or Lutherans or Episcopalians moved into the neighborhood, it was not necessary to think too much about power, delegation, or decision-making. Everyone agreed on the essentials of what needed to be done: the building had to be maintained, the minister and staff modestly compensated, and the committees adequately funded to continue doing what they did. The main checkboxes of church life—worship, education, fellowship, the wider mission—had to be checked off.

The most important kind of power in that situation was the veto power—the power to prevent or slow down distracting innovations. On the premise that the church was already doing the right things in the right way, decision-making structures were designed to resist change. Veto power was given to those most committed to the status quo—seasoned clergy, long-tenured members, major contributors, and faithful volunteers. Leaders had little need to delegate decision-making power. Instead, they promulgated static job descriptions and procedure manuals to help newcomers learn how to continue to “do church” in the accepted and effective ways.

In our time, congregations face a different situation. Familiar patterns of church life no longer attract widespread support. Nice people no longer think that all nice people go to church. Not even dedicated churchgoers think they have to go to your church, necessarily—not with so many spirited alternatives—and their children certainly don’t think so. All this can be a good thing, but only for a church that learns to be more purpose-driven and inventive.

The new situation is a problem for a church where lots of people can say “no” and hardly anyone can say a clear and final “yes.” Today, churches that cling to a strong bias for the status quo decline; the churches with the best chance of preserving what is precious are those that engage continually in trial and error.

Successful churches in today’s world are devout about their purpose but agnostic about any given program or activity. Ironically, a church with a rigid and simplistic purpose (such as: “Saving souls by making them agree with us”) is apt to be quite flexible in choosing how to achieve that purpose. If you believe your purpose is to save the lost from hell forever, you’ll do whatever you must do to save them. (“Guitars? A light show? Sure, whatever brings them in!”).

By contrast, a broad-minded church is more apt to have a fuzzy sense of purpose (such as: “We’re a friendly church for friendly people”). Lacking urgency, it’s leaders easily fall into worshiping their own familiar ways of doing things at church. They argue about what music they should listen to, what flags to put onto the chancel, and how openly they will acknowledge forms of diversity that could once be kept comfortably hidden.

A church that is uncertain why it exists at all clings to whatever makes its members comfortable. But a church whose heart is seized by a compelling purpose sacrifices what is comfortable in favor of what works. To reach people different from the current membership, what works is to empower leaders to engage in purpose-driven trial and error. To empower innovative leaders—especially leaders drawn from outside of the current inner circle—what works is delegation.

At every level of an organization, certain basic principles of delegation apply. The point of delegation is to enable others to make independent choices, while ensuring that those choices are aligned with the church’s goals and principles. In order to accomplish this, all delegators owe their delegates the same three things:

In other words, effective delegation states and balances three things: the goal to be accomplished, the power to be delegated, and accountability for how that power is used. Too often in congregations, we hold people (especially paid staff) accountable for things without giving them enough authority to make it fair to do so. Or we give people (especially volunteers) authority without holding them accountable. With everyone, we tend to skimp on giving enough guidance—in advance—about what kind of performance would please or displease us. The resulting guessing game produces a great deal of needless stress for everyone.

One mistake both boards and supervisors often make is to require the delegate to check back and get approval for all significant decisions. A session might, for instance, adopt detailed policies on building rentals and then add, “All rentals must be approved by session.” In one stroke, what might have been delegation has become a Yo-yo! Real delegation empowers others to decide, and reduces the delegator’s workload. Most importantly, effective delegation grows the institution’s wisdom by enlisting a new mind, not just a pair of hands.

In specific cases, the right style of delegation, and of supervision generally, depends on the job competence of the person being supervised. Beginners—including new senior pastors—want and need detailed instructions. Experienced workers want some freedom and a lot of encouragement. Expert workers fare best when they are allowed to work with a minimum of checking in and checking on. When trying to develop expert leaders, it pays to remember that once you have defined a goal and delegated the appropriate authority, as many bucks as possible should stop with the delegate, not bounced back to the delegator. Sessions and staff supervisors, take note!

The basics of sound delegation apply equally whether the delegator is the session, senior pastor, a staff member, or a volunteer leader. They apply whether the delegate is paid or not, ordained or not, part time or full time, long term or short. All three elements must be in place: the goal to be achieved, the power to be used, and the plan for mutual accountability.

It’s fine to say THE BUCK STOPS HERE. But if you want to be a leader rather than a soloist, you have to see to it that most of the bucks stop elsewhere. To do that, you have to build up the authority of others by creating covenants of delegation. Sound delegation frees staff and volunteers to help fulfil the church’s purpose in ways leaders would never have imagined. And it frees leaders to spend less of their scarce time micromanaging the work of others, and more time on their own work of discerning and deciding on new goals for the church to reach.

An earlier version of this article appeared in Presbyterian Outlook, August 30, 2016.