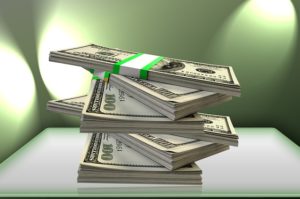 I had always assumed that religion was a naturally nonprofit enterprise. But then, while touring Nashville with a fellow minister, I heard the story of a Presbyterian named Frist. “You know how Bill Frist’s family became billionaires?” my colleague asked. I had to admit I didn’t, though at the time Senator Frist was a contender for the Republican presidential nomination.

“The Frists invented the for-profit hospital.”

I thought about this for a moment, then said, “You know how you and I are going to become billionaires? We’re going to invent for-profit churches.”

After a beat, my friend rained on my parade. “It’s already been done,” he said.

I suppose that’s true, but it raises an interesting question that comes up sometimes on congregation boards: What does it really mean to be a nonprofit? If you’re looking for pat answers, you won’t get them from me—at least not today. Instead, I’m going to share some of my own thought process, in the hope that it might cause you to think about this issue in some fresh ways. Feel free to write to me if you have ideas.

Congregational leaders invoke nonprofit status as an argument against such goals as building up a cash reserve, paying competitive salaries, marketing the congregation’s services, or holding staff and volunteers to a high standard of performance. Predictably, when goals like these are raised, someone will object: “Our church is a nonprofit, not a business.”

But what does it mean to be nonprofit? One theory popular with some congregational leaders is that a nonprofit serves a noble purpose, while a business serves only to enrich its owners. This self-congratulatory notion overstates the case considerably. It is quite possible to make a good living, or even to become wealthy, in the nonprofit sector. And it is also possible to pursue noble ends while running a business.

It is true that the owners of a business corporation are its stockholders, while the owner of a nonprofit like a congregation is—as I have said before—its mission. But we humans often confuse our notions of the good with our personal self-interest, and so the boundary between working to make money and being paid to work for truth and justice often is not easy to discern in practice.

The hospital example is instructive. Hospitals began as church-sponsored charities. Over time, many hospitals became self-supporting nonprofits, and then highly profitable business corporations. Today it’s hard to tell the difference between a nonprofit hospital and its for-profit competitors. Who can say what aspects of the work of congregations might someday be carried on as profit-making businesses? To make wise choices in this area, congregational leaders need to understand of the difference between business and non-profit structures.

How profits and non-profits raise funds

In my view, the most important difference between for-profit and nonprofit structures does not have to do with purpose, taxes, or even profits, but with fundraising. How do we raise capital? How do we gather funds to build and repair buildings, buy equipment, develop products and services, and call attention to ourselves? Both kinds of enterprises can borrow money for these purposes. And both can ask for contributions—though in business it is customary to call contributions by a different name: investments.

What nonprofit organizations may not do is promise their contributors anything in exchange for contributions. This is an important restriction! Investors in a business hope to benefit from the success of the enterprise by receiving dividends or by seeing their share prices rise. This powerful way of gathering capital is denied to nonprofits. Instead, nonprofits offer other benefits to their investors—the satisfaction of extending their capacity to do good, the camaraderie of a group acting in concert, and (for the 30% or so of taxpayers who itemize) the chance to deduct contributions for tax purposes.

I am not suggesting that all congregations rush out and reorganize as businesses. But clergy and board members do need to understand what “being a nonprofit” really means, and what the alternatives actually are. This is especially urgent now, because the boundary between business and nonprofit sectors has been shifting rapidly.

Education, for example, has worked both sides of the street for a long time. Most early American schools were what we now would call businesses, run by educator-entrepreneurs. Only well after the Civil War did public education become the rule rather than the exception in most places. Colleges were generally either public institutions or private—often church-supported—charities, and most still are. But recently proprietary schools and colleges have proliferated. Despite concerns about aggressive marketing and sometimes marginal academics, for-profit schools seem likely to be here to stay, along with public and nonprofit options.

In other fields, nonprofit and for-profit entities have long existed side by side: art museums and art galleries, symphony orchestras and rock bands, public and private broadcasting. Sometimes the relationship is symbiotic; generally, it is competitive as well. It is not always obvious what part of the work in any sector should be organized which way.

One important factor, obviously, is how profitable the business is. Health care for profit works because health care has become quite profitable. Profitability, in turn, results from the perceived value of the goods or service in question. Most of us believe that high-tech health care holds the keys to living long, happy life. Whether this is true or not, it makes us willing to part with quite a bit of money to get what a hospital can offer.

Congregations occupied a similar position in the Middle Ages, when most Europeans believed the Catholic Church held the keys to living a long, happy life—eternal life, in fact. Under that assumption, it made sense to part with quite a bit of money to support the church. And sure enough, the medieval church was owned and operated by the wealthiest, most powerful members of society. Parishes were organized like minor fiefdoms, and bishops were a lot like dukes.

Religion: for profit or not?

Hardly anyone today believes that one church holds the keys to heaven. But religion still works as a for-profit business, especially when it offers clear, compelling value to the customer. Most communities have religious bookstores, yoga centers, kosher delis, Christmas Tree Shops, and wedding “chapels.” The Hotel Viking in Newport, Rhode Island, for example, purchased a historic church building as a wedding venue for couples wanting to be married in a churchlike setting. As the pastor of a nearby church, I was put off at first, but then I had to ask: How is this different from a church that allows weddings in its sanctuary for the purpose of collecting fees (aside, of course, from the fact that the hotel charges more, pays higher salaries, and owes tax on its real estate and profits)?

Turning the proposition around, what would be wrong with a church setting up a wedding chapel as a profit-making business? Depending how it was done, such an enterprise might or might not require the church to pay tax on its “unrelated business income.” It might or might not involve loosening its religious standards for performing weddings.

These are important choices with important implications. What aspects of our work need to be purely mission-driven? What aspects of our mission can we achieve better by availing ourselves of one of the most powerful of human motivations: the desire for profit? I don’t know the answers to these questions, but I feel certain it is getting to be time to think about them in fresh ways.