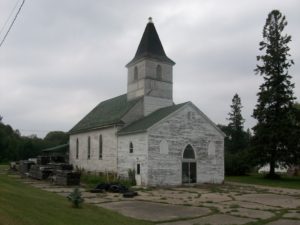 Many congregations are seeing a decline in contributions and attendance. Most of them try to address the decline, usually by tweaking staff size and deferring maintenance. But I rarely encounter a church that is willing to consider one of the biggest and potentially most energizing changes: letting go of the building.

I’m a Presbyterian in a thriving mid-sized city–Best Minor League Sports Market, Best Art Festival, one of Top 10 Best Places to Live in the US–yet at least five local Presbyterian churches are perilously close to shutting down. Two of these congregations were always small, two were middling, and only one was ever large, but all have large buildings that once were filled with bustling Sunday School classes and now are mostly empty. They know they need to do something different, but I can see the pain in their eyes when they think that “something different” might involve the building.

Are We Our Building?

Church buildings play an outsized role in congregational identity. For example, most of us identify our church to others by something about its location or physical characteristics. “We’re the big new church at the corner of 42nd and Grand,” or “We’re the church with the bright red doors near the Capitol.” Any congregation that leaves a well-known location, whether for a new location or to embark on a nomadic existence, needs to do the hard work of identifying itself by what it does, rather than by what it looks like or where it is located.

Physical features of the building carry memories of events that helped to define both personal and congregational identity. “This chancel is where my son was baptized,” or “Martin Luther King preached from this pulpit.”

Because of such associations, buildings can suppress healthy conversation about the future. As artifacts of past priorities, buildings can demand allegiance to decisions that no longer serve the congregation’s interests or the community’s needs. If allowed to deteriorate, buildings can even trigger a kind of communal depression in which fresh ideas struggle to emerge.

But there is not always another congregation looking for space. In those cases, repurposing is an option. Repurposing is something most of us are familiar with. I have a friend, for example, whose coffee table started its life as a chick hatchery. Almost any website devoted to crafts will provide instructions on turning plastic spoons into lamps or ladders into bookshelves.

Repurposing a building is adaptation on a different scale, but it involves the same principle–adapting something, in this case a building, to another use. In Detroit, for example, a five-story fire station built in 1929 was repurposed into a 100-room boutique hotel after the fire department moved out in 2013. My favorite repurposing is the High Line, an elevated “linear park” built on the abandoned rail lines of the New York Central Railroad on the west side of Manhattan. Around the world, church buildings have been repurposed as single-family homes, apartments and condos, performance and event spaces, restaurants and bars, non-profit centers—even bookstores!

Either selling or repurposing a building usually involves leaving it, which is rarely where a congregation wants to start when faced with a building they can no longer fill or afford. To leave the building feels to long-time members like abandoning all that is important in the congregation and its history.

But leaving a building is not the same as abandoning your past. Selling or repurposing a building preserves it—for a new and different use. Releasing a building gives permission for a valued artifact of congregational identity to be incorporated in new ways into the lives of a new generation.

Nor does the congregation necessarily abandon its identity as it moves on. A congregation that once hosted Martin Luther King can be vocal and progressive in its new space. A congregation that remembers baptizing “all those children” can still cherish children and baptize its members’ grandchildren—sometimes even at the same baptismal font—because it moved, too!

Congregation members are slow to consider letting go of buildings, often allowing both the buildings and their faith to deteriorate rather than embracing new possibilities through the ongoing work of the Holy Spirit. My hope is that we can all find a way to temper grief with joy. May we preserve the architecture of the past by giving it new life and enliven our own congregation in the future by finding it new space.