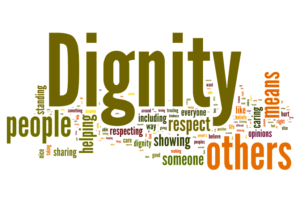 If you are inclined to doubt this generalization, consider these two modestly fictionalized accounts:

A few months ago a group of concerned members in the Placid Hills Church organized a petition drive in their effort to remove the lead minister and “save our church.” After a series of invitation-only meetings with disgruntled members, one of the petition organizers recently rose during the “sharing time” at the end of the service to ask for prayers for the success of the petition drive (and invite additional members to sign the petition). The announcement was met with gasps of horror from some members and applause from others.

Prior to Temple Beth-El’s recent annual meeting, an informal group of congregants met to discuss the proposed budget. Opposed to the Cantor’s continued service in the synagogue, they resolved that one group member would make a motion to eliminate the amount budgeted for the Cantor while another member would second the motion. After a series of phone calls, the group was confident they had sufficient votes to pass the motion, thus eliminating funding for the position of Cantor.

While every congregation is indeed a political system, political activity does not need to be manipulative, polarizing, or personally demeaning. The Greek word translated as “church” in the Christian Scriptures, ekklesia, means “a gathering of citizens called out from their homes into some public place; an assembly.” Likewise, the word “synagogue” is derived from the Greek word synagein, and means “to bring together.” In Hebrew, a synagogue is referred to as beit ha-knesset, which has the same meaning—a “house of assembly.”

When citizens leave their homes to “assemble” in a synagogue or church, they inevitably form a political system as well as a spiritual and social one. Yet the reality that congregations are not only spiritual and social systems but also political ones is for many congregants a deeply disturbing thought. Politics appears to be brutish, nasty, and coarse—particularly in the current U.S. election cycle. Bringing such malodorous activities into a religious congregation strikes many congregation members as something abhorrent. Can a congregation be a healthy political system, or are we condemned to replicate the political grandstanding, intransigence, and polarization that now dominate our national politics?

I would suggest that there are four essential requirements for a congregation to function as a healthy political system:

Destructive political activity often results when individuals and groups in a congregation do not understand—or do not trust—existing decision-making mechanisms. A congregation’s bylaws or other constitutional documents should clearly describe the locus and process of decision-making, including the “decision rule” (e.g., whether full or modified consensus is required). In addition, all new governing board members need an orientation to the polity of the congregation—how the congregation is organized and how decisions are made. Fuzziness in decision-making is a chronic cause of negative politics in congregations.

2) Clear lines of authority and accountability

Position descriptions for professional staff are as essential for healthy congregational functioning, as they are in any other organization. Periodic role clarification is needed as individual positions turn over or are revised. Every position description should also clarify to whom that position is accountable, and provide for annual review and accountability, in order to ensure meaningful accountability. One of the main reasons some top congregational leaders have “gone off the rails” in recent years is that their congregations lacked meaningful accountability mechanisms.

3) Clear channels for communication and participation

4) Dignity and Respect as Cultural Norms

By far the most important requirement for healthy politics is that a congregation hold and practice strong cultural norms of dignity and respect. Author Donna Hicks defines these terms this way:

“Dignity is our inherent value and worth as human beings; everyone is born with it.

Respect, on the other hand, is earned through one’s actions.” — Donna Hicks

To be treated with dignity, therefore, is the inherent right of every human being—even if we are unable to accord respect to the behavior of a given individual.

When implemented, these four requirements for healthy congregational functioning produce dramatically different political behavior from the two accounts at the beginning of this article:

At the Placid Hills Church, several members of a small group realized that they shared concerns about the lead minister’s functioning and recent declines in attendance and giving. They also knew that the minister’s annual review was pending, and trusted that the Personnel Committee of the board would lead a fair review process. The Personnel Committee had the practice of conducting 360 degree reviews, inviting input from staff members who reported to the lead minister as well as from board members. Because of these clear accountability mechanisms and consistent communication from the board about its processes, the small group members agreed to trust that the evaluation process would identify needed improvements in the lead minister’s performance and work to address them.

At Temple Beth-El, the annual meeting is structured to provide opportunities for both reporting and responding. Prior to bringing a slate of nominees for board roles and a proposed budget to the annual meeting, the congregation’s board distributes the slate and the budget two weeks prior to the meeting and invites verbal and written feedback. Congregants are thus not surprised when they arrive at the annual meeting, nor are board members blindsided by surprise motions. The overall atmosphere at the annual meeting is one of mutual respect and concern for the dignity of all in the room, even as the board is now aware of concerns about the Cantor’s performance and pay scale because of prior feedback.

Congregations are indeed political systems. But they don’t have to be as dysfunctional and polarized as our more visible political systems currently are. A commitment to clarity and to upholding human dignity are the two most essential requirements for healthy congregational politics. Whatever the state of politics in your congregation, it’s never too late to start improving them.

[box]David Brubaker has consulted on organizational development and conflict transformation in the U.S. and in a dozen other countries. He is the author of Promise and Peril, an Alban book on managing change and conflict in congregations. David holds a PhD from the University of Arizona and an MBA from Eastern University, and teaches organizational studies as an associate professor at Eastern Mennonite University. email David[/box]