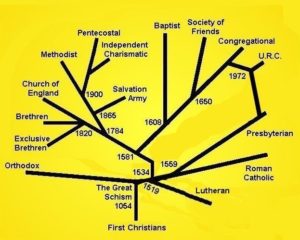 The dramatic decline in denominational affiliation and loyalty in the U.S. in the last half century has prompted many to ask, “Do denominations (and their regional bodies) matter?” When there is often more variation in belief and practices within a given denomination than between denominations, what does it mean to identify as a Presbyterian or Methodist, or as part of the Conservative or Reform movement in Judaism?

Traditionally, denominational affiliation has made three main contributions. The first is a sense of identity. The stronger that identity, the more likely a group is to at least retain and possibly attract members. But in the welcome wave of ecumenism that swept through mainline denominations since 1960, the distinct identity of mainline U.S. denominations receded as we focused more on our similarities than our differences. What may be needed now is a reassertion of unique identity while maintaining ecumenical connections.

A second contribution of denominations is the connectional capital they offer. This means that congregations and clergy are linked through the regional and national associations created by the denomination’s structure. While important primarily for fellowship and interaction, such connectional ties become critical when accountability questions arise—such as allegations of ethical misconduct against a credentialed leader. Formal denominational policies and procedures tend to be more comprehensive than those an individual congregation might develop—and are often essential when managing personnel and legal issues.

Why are denominations declining?

If denominations offer a sense of identity, connection, and resources, why are so many in decline? As the most visible artifacts of organized religion, denominations are suffering the impact of widespread decline in religious participation in the U.S. and the accompanying dip in financial support. When local congregations decline, their denominations and regional judicatories are inevitably impacted as well.

Can denominations be revitalized? I believe that they can, by providing the three critical distinctives discussed above—identity, connection, and resourcing. Here is a modest proposal for making denominations matter.

Do denominations matter? They do when they focus on identity, build connections, and share resources. But when they become arenas to contest the latest theological and political squabbles, they erode their own effectiveness in these critical areas. Denominations matter when they serve the congregations and the individuals who comprise them. They cease to matter when they serve themselves or serve only as political platforms for competing interests.