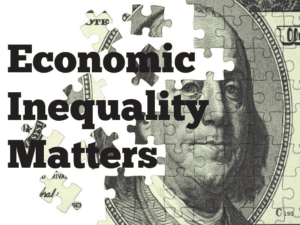 The post-World War II era was a time of rising prosperity for most Americans. But in the mid-1970s, wealth began to accrue primarily to those at the very top. As a result, by 2016, income inequality in the United States was starker than at any time since the Great Depression. Congregations are not immune to this trend and must acknowledge and address economic inequality among their members and in their communities.

Economic inequality correlates strongly with political polarization. When the gap between the richest and the poorest grows, political polarization rises as well. Political scientist Nolan McCarty and his colleagues chart this correlation with prodigious statistics in Polarized America: The Dance of Ideology and Unequal Riches. Between 1970 and 2000, when the income share of the top 1% increased from 8% to 18%, polarization in the US House of Representatives more than doubled.

This correlation is also evident across countries. Countries with the greatest gap between rich and poor tend to experience high levels of political polarization. Data strongly suggest that one of the best antidotes to polarization may be to work for progressive tax policies and a flatter distribution of pay. (The CEOs of the largest corporations now earn nearly 300 times more than the average American worker.) Large income differences clearly contribute to polarization.

Inequality and polarization also impact congregations. My colleague Dan Hotchkiss addressed this reality more than a decade ago in “Pretending to be Equal”:

It is one thing to believe that [rich] people and poor people should be political and social equals; it’s another to pretend that they are already more equal than they are. The cliché of “rich and poor alike” can do real harm if it distracts attention from the injustices that go with economic inequality. To achieve the egalitarian ideal requires recognizing the ugly fact that rich and poor live very differently.

Even those congregations that consider themselves to be comprised primarily of middle-class members experience this class divide. Some reminders of inequality in congregational life include:

As much as congregations may desire to downplay internal differences of class, it is impossible to erase them. As Hotchkiss suggests, embracing both our dreams and our reality requires a tolerance of paradox:

The dilemma, I think, is to hold on to two competing values: on the one hand, the ideal of social and spiritual equality, and on the other, the reality of inequality. Democracy and human dignity depend on holding to the ideal, and the success of the institution requires that we acknowledge the reality.

I believe a congregation can become one of the rare places in our society where class differences are acknowledged but not accentuated. To achieve this, leaders might consider the following suggestions:

When Jesus told his disciples “the poor you will always have with you,” (Matthew 26:11) he was quoting from a passage in the Hebrew Scriptures that reads in full: “There will always be poor people in the land. Therefore, I command you to be openhanded toward your fellow Israelites who are poor and needy in your land.” (Deuteronomy 15:11)

Therefore, my final encouragement is to be “openhanded” (generous) with those in need in your congregation and community. Congregations that are generous with their communities (sharing resources, space, and volunteers) tend to experience greater generosity from their own members. Conversely, congregations that close their hands to their communities and isolate themselves find that their members do the same thing. Generosity begets generosity.

If we wish to reduce inequality and polarization in our society, we must start by doing so within our congregations.