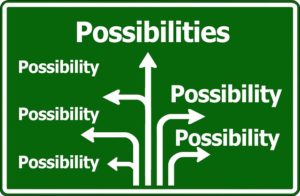 Time and time again in congregations, I encounter either-or thinking. People want to focus either on church growth or mission to the world; maintain the building or give the staff much needed pay increases; focus on the number of people who attend worship or the number of people our ministry “touches” during the week; have classical or praise music. In so doing, we pit things against each other that should be working together for the glory of God and shared purpose of the congregation.

Of course, with an either-or approach to reality, we also reflect our culture: either pro-life or pro-choice; pro-guns or anti-guns; diplomacy or war. Either-or thinking is ripping apart our nation and crippling a lot of congregations. But there is usually another way: both-and.

A new example of unhelpful either-or thinking can be the increasing use of “touches” as a metric for the vitality of a ministry versus the use of worship attendance. Using this approach, congregations attempt to count how many people their congregation “touches” through its various ministries: by hosting an AA meeting, Nursery School or feeding program for the homeless; or through campus ministry, youth ministry, or Meals on Wheels. The “touches” concept is a helpful metric for evaluating both the depth and breadth of ministry.

Recently, a judicatory decided not to give its staff a cost-of-living adjustment (COLA), because if they did so it would mean budget cuts elsewhere. The COLA and cuts to the mission budget were pitted against each other. How might they move from either-or to both-and?

The judicatory was making a couple of key assumptions: 1) the budget had to be balanced and 2) they couldn’t cut any ministry programs. In effect, the staff was asked to pay the price for implementing those assumptions by not receiving COLAs. In my opinion, the judicatory’s leadership displayed a lack of creativity about their options. Creative leaders don’t passively accept assumptions that put them in an either-or position. They aggressively encourage people to find a better way of analyzing their options. Searching for both-and solutions reduces the number of either-or choices leaders face.

If the judicatory had added a third assumption (staff members deserve to be paid fairly), another type of discussion would have opened: How can we pay our staff fairly, balance the budget and not cut mission programs? With three, instead of two, competing assumptions, it is clear that everyone will need to share the pain.

Perhaps the judicatory will downsize both its staff and mission programs to create enough budgetary flexibility that one part of the work of the church doesn’t suffer at the expense of another part. Whatever the solution, the judicatory will move beyond either staff needs or mission program needs to a better, more equitable place. All the while, the budget remains balanced.

The biggest problem with either-or thinking is that it creates false choices. We start thinking that we have limited options when life usually presents us with a variety of options. In the middle of the Sinai Desert, some of the Hebrew people decided, “We either go back to Egypt or we die.” Fortunately, Moses and others envisioned a richer palette of choices and found a way to continue their journey to the Promised Land.

As congregations, if we are going to reach our Promised Lands, we need to employ thinking that multiplies rather than reduces choices. As leaders, we need to spot either-or thinking when it pops up in our decision-making processes and encourage our members to see if both-and is a possibility. It usually is. When it is, win-lose is replaced by win-win or partial win-partial win.

John Wimberly is the author of the new Alban book Mobilizing Congregations: How Teams Can Motivate Members and Get Things Done. He consults with congregations on issues such as the creation and implementation of strategic plans, congregational growth and the empowering use of endowments. John served congregations for 38 years, thirty of them at Western Presbyterian Church in Washington, DC. His quest for continuing personal, spiritual and professional growth led John to complete a PhD in systematic theology and an Executive MBA program.[/box]