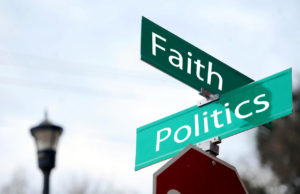 In what is certainly the strangest U.S. presidential election since I first voted in 1976, the polarized national political environment is now seeping into our local congregations. Pastors, priests and rabbis have reported pressure from some congregants to “speak to the issues!” and from others to “stay away from politics!” Many congregational leaders are also concerned about the nasty tone from some presidential candidates and feel compelled to call for civility. What should a congregational leader say in the midst of a toxic and omnipresent political season?

Rabbis, priests and pastors may feel that they have only two options. Either they wade into the fray or they avoid political issues altogether. But there is a third path that is available—preaching our principles but not our politics. Effectively preaching our principles requires two traits—clarity and humility. First, we must be clear about what we believe and why we believe it. Second, we are most effective if we share our principles confessionally rather than prescriptively. (“This is what I believe,” instead of “this is what you should believe.”)

In an effort to model such transparency I decided to share the three principles that most guide my voting choices (and hopefully my daily behavior as well). I share them as examples of one person’s convictions, as each of us have developed our ethical principles from a unique combination of family and religious traditions, life experiences, and cumulative choices. I also share them to encourage you to reflect on your own ethical principles and how they will shape your political engagement in the coming months.

1. The sacred texts of my tradition reveal that God has a special concern for the most vulnerable and marginalized in a society, and that God expects those who revere these texts to act on that concern.

This is reflected in Jesus’ clear words in “the sheep and the goats’ passage” in Matthew 25 as well as in the frequent calls of the Hebrew prophets to care for the widows, orphans, and “strangers” (immigrants) in the land. In a patriarchal culture predicated on a shared ethno-religious identity, these were the three groups of human beings who were most vulnerable to abuse and mistreatment. In the U.S. today, such vulnerable groups would include the LGBT community, Muslims, and recent immigrants and refugees. How do the clear commands of the Hebraic and Christian Scriptures shape my own principles and practices in response to these communities, as well as my voting choices?

2. “Hate cannot drive out hate; only love can do that. Hate multiplies hate, violence multiplies violence, and toughness multiplies toughness in a descending spiral of destruction.” (Martin Luther King, Jr.)

I agree with Dr. King that the vicious cycle of hate and violence is only accelerated when we respond with hate and violence. I therefore embrace an ethic of nonviolence in my personal life, and I pray and work for a society and a world that does the same. Questions remain, however. What does it look like to practice active nonviolence in both word and deed in my own relationships? How should a society respond to gun violence at home and religiously-justified violence against civilians abroad? What role does a local congregation have in working to reduce violence in its own community and society?

Along with concern for the marginalized and a commitment to nonviolence, I hold this concept of “stewardship” (rather than “ownership”) of the earth as a core principle. I choose to believe in a higher power that created and sustains the universe, and who also set in motion evolutionary processes that allow for continual adaptation to changing environments. Regardless, I see human beings as stewards of this magnificent planet. We are not to exercise “dominion” over the earth in terms of “dominating” it, we are rather to care for and sustain it.

These are the three major ethical principles I strive to embrace—concern for the marginalized, a commitment to nonviolence, and care for the earth. While the practical implications of these principles are challenging enough at the personal and relational level, sorting out the political implications are even more complicated. I have yet to encounter a presidential candidate with the commitment to nonviolence of a Martin Luther King or a Mahatma Gandhi, for example. (Nor do I imagine that one would ever be nominated by a major political party.)

But precisely because these principles are so difficult to embody (at both the personal and political level), I also believe that we can only embrace the practical implications of such principles in the context of a community of shared values. This is why I am dedicated to my local congregation, and particularly to one religious education class in my congregation that discusses the implications of the sermon on a weekly basis. It is one thing to articulate our principles…it is something else to embody them. A healthy faith community provides regular opportunities to both name our deepest principles and to reflect on the daily challenges of living them out.

What about you? What are your core principles? How are you living them out, or at least striving to, every day? How might these principles influence your political choices in the coming months? Who comprises the community that assists and challenges you in articulating and embodying your principles?