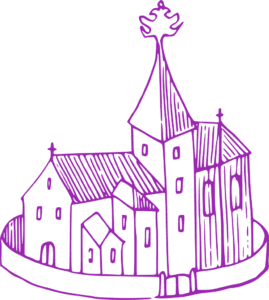 Lately, I have been working with congregations that quietly describe themselves as purple. In these congregations, people who are politically conservative, progressive, and centrist come to worship God, deepen their spirituality, and work together to create a more peaceful, just, compassionate world. My question to these congregations is: Why do you talk so quietly about your purple nature? Why not proclaim it from the rooftops?

It is well documented that younger generations value and enjoy diversity. They prefer situations where there is racial, ethnic, age, LGBT, economic and other forms of diversity in the room. “Politically, millennials are the most independent generation,” reports CNN’s Hunter Schwartz. “They’re the least likely to see big differences between the Democratic and Republican parties. Last March, the Pew Research Center found that 44% of millennials identify as independents.

Poll after poll reveals that the American public is disgusted and discouraged by the polarized nature of our society. Given that fact, why do so many congregations brand themselves as “progressive” or “conservative”? Isn’t a more diverse, heterogenous congregational identity preferable?

Wouldn’t such people find inspiration and hope in the good news that there are people of faith who welcome political diversity rather than seeing it as a problem? Wouldn’t the overwhelming majority of our neighbors who decry the uncivil nature of political discourse today be intrigued by a congregation where people can discuss differences of opinion in a civil, even love-filled manner? I think the answer is yes.

Breaking down the harsh discourse in this country is not going to start at the top and trickle down. It will start at the community level and work its way upward. What organization is more community-based than a congregation? As a result, what organizations are better positioned than congregations to start the return to a society where politics is a form of diversity, not yet another form of “us versus them?”

The political orientation a congregation chooses to project is a fundamental, strategic decision. In strategic planning, we need to consider how our congregations wants to position itself in our polarized society. Does it want to be progressive, conservative, or purple?

Heretic in the parking lot

In 2004, a member of the congregation I served ran up to me before worship and said, “John, there is someone with an ‘Elect George Bush’ bumper sticker in the parking lot! What are we going to do?” Clearly, he wanted me to react as though someone had double-parked, and make a public announcement asking them to move their car. After a moment, I responded, “We’re going to worship God with whomever chooses to join us.” A sense of relief came across his face and he said, “Oh, that is true. Everyone is welcome here.”

When I have raised this issue with some progressives, they express fear that the presence of conservatives in their congregation will cause them to make compromises they don’t want to make. The same dynamic is at work in conservative congregations as well. Heterogeneity is viewed as diluting a pure faith.

However, maybe what we should fear is being in a bubble where the only thing we hear are statements that reinforce our own beliefs. Isn’t that what the early Jerusalem church did? When Paul suggested that the church be expanded to include people with different opinions, cultures, etc., they rejected the idea. They feared that their faith would be diluted, corrupted, or compromised by Gentiles.

History teaches revelatory lessons. The early Jerusalem church, obsessed with maintaining the purity of its beliefs, died a fairly quick death in its bubble. The diverse congregations started by Paul and others grew rapidly. Is there a message here?

John Wimberly is the author of the new Alban book Mobilizing Congregations: How Teams Can Motivate Members and Get Things Done. He consults with congregations on issues such as the creation and implementation of strategic plans, congregational growth and the empowering use of endowments. John served congregations for 38 years, 30 of them at Western Presbyterian Church in Washington, DC. His quest for continuing personal, spiritual and professional growth led John to complete a PhD in systematic theology and an Executive MBA program.[/box]