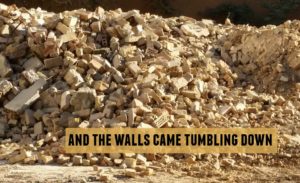 Trust in our institutions—and in institutional leaders—is crumbling. Put simply, our society and our world are changing much too rapidly for our institutions to keep pace. As a result, many view our great institutions of the 20th century as incompetent at best and corrupt at worst. Religious institutions are no exception.

In 1964, more than three-quarters of Americans (77%) said they could trust the federal government “just about always or most of the time.” But in 2015, less than a fifth (19%) expressed the same level of trust, with only 6% saying they trusted Congress. Corporations haven’t fared any better. While small businesses tend to be more trusted, only 18% of Americans told Gallup this June that they trust “big business” a “great deal” or “quite a lot.”

Since the sexual abuse scandals of the 1990s, religious institutions have also seen a dramatic decline in trust levels, with less than half (41%) of Americans now professing trust in “organized religion.” Of all institutions, the one most distant from the great majority of Americans continues to hold the highest trust levels—73% of Americans report a “great deal” or “quite a lot of trust” in the military.

A 2012 article by Ron Fournier and Sophie Quinton in The Atlantic Monthly, “How America Lost Trust in our Greatest Institutions,” summarizes the current institutional crisis:

Government, politics, corporations, the media, organized religion, organized labor, banks, businesses, and other mainstays of a healthy society are failing. It’s not just that the institutions are corrupt or broken; those clichés oversimplify an existential problem: With few notable exceptions, the nation’s onetime social pillars are ill-equipped for the 21st century. Most critically, they are failing to adapt quickly enough for a population buffeted by wrenching economic, technological, and demographic change.

The primary consequence for leaders of this pervasive loss of trust in institutions is that institutional leaders are seldom given any benefit of the doubt. Leaders today are much more likely to be perceived as acting in “bad faith” than they were even 30 years ago when I began to consult with organizations. Ignoring Ronald Reagan’s dictum of the 1980s, “Trust, but verify,” some organizational members today take a very different approach to leaders: “Distrust, then distance.”

The toll of this dramatic cultural shift on congregational leaders has been profound. Although only one percent of pastors leave the pulpit each year for reasons other than death or retirement, 54% of pastors find their role “frequently overwhelming.“ Leadership in an age of declining institutions is a very rocky road.

There is a bright side to this implosion of trust in institutions. “We have lost our gods,” says Laura Hansen, an Assistant Professor of Sociology at Western New England University in Massachusetts. Institutions, it turns out, are deeply fallible human constructions. We were mistaken to ever put our trust in them. As a colleague responded when I confessed to having become completely disillusioned with a particular religious organization, “What gave you the right to be illusioned in the first place?”

The combination of interpersonal relationships and individual agency equips congregations to stand in stark contrast to large institutions, which tend to be both impersonal and disempowering. Along with a third function of religious communities—meaning-making—congregations meet three of the most fundamental human needs (affiliation, autonomy, and meaning). Of course, in order to live up to their promise local congregations need to organize themselves to support these core strengths.

Interpersonal relationships can be enhanced through opportunities for “coffee fellowship,” shared meals, and religious education for all ages. Individual agency is enhanced when congregational members are encouraged to speak into decision-making processes and invited to serve on task forces and teams that welcome their participation. Meaning-making occurs through the rituals, artifacts, and stories that are core to every religious tradition.

The walls are indeed tumbling down on the institutional era of religious life. Our national religious bodies are in steep decline and our regional judicatories are struggling to survive. But the local congregation, with its unique ability to bring people together, allow them to shape their community life, and provide meaning, remains a beacon of hope for the future of religious life in this country.