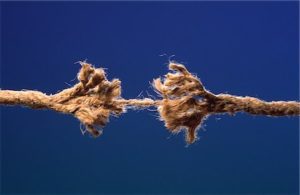 Nearly all Americans agree that our country has seldom been so polarized. Polarization in the United States today affects every level of our society—families, congregations, workplaces, communities, and the country as a whole. If we are to successfully overcome polarization, we must first look deeply into its roots.

Some effects of polarization are quite obvious—extended families arguing politics at the holiday table, competing bumper stickers in the congregational parking lot, and nasty exchanges on social media.

Yet the underlying causes of polarization are very opaque. What causes a family, congregation, or society to polarize? Following are ten of the most commonly cited causes of societal polarization in the literature. In subsequent issues of Perspectives, we will address how to lead at any level in a polarized environment.

In social identity theory, the groups with which we identify are an important source not only of belonging but also of self-esteem. Thus, individual members of an identity group are particularly likely to exhibit hostility toward other groups if they feel their status is threatened. Social identity theory and its concept of status threat help us understand why voters might respond to a leader who promises to renew the real or perceived declining status of an identity group.

Racism may also be a significant implicit driver of polarization. The legacy of enslavement and the reality of ongoing systemic racism produce profound racial inequities. According to the Washington Post, “white families have nearly 10 times the net worth of black families. And the gap is growing.” Despite this reality, a majority of white Americans believe they are victims of discrimination. Research suggests that when voters believe that members of a disadvantaged minority are unfairly “getting ahead,” they respond positively to “grievance narratives.”

Like racism, sexism and gender discrimination continue to infect American society. While men are much more likely to vote Republican than are women, gender does not seem to be the prime contributor to polarization. In 2016. the class gap between white college-educated women and white non-college educated women was much larger than the gender gap between women and men. While class, race, and gender all matter in determining voting patterns, the most significant contributors to polarization in the U.S. appear to be economic inequality and white resentment. When voters feel abandoned and bypassed, they are particularly vulnerable to populist and nationalist messages.

Ethics professor Jonathan Haidt in The Righteous Mind: Why Good People are Divided by Politics and Religion, suggests that “morality is the key to understanding humanity.” Because every human being exists both as an individual and as part of a larger society, we are subject to “parochial altruism.” Parochial altruism tends to produce generous and empathetic behaviors within a group but exclusionary or even violent behaviors with outsiders. The result can be a toxic tribalism or nationalism—a “my group right or wrong” attitude that excludes or harms others. It’s possible that those on the extremes of our current polarized divide occupy two differing moral universes.

When it comes to polarization, America is not exceptional. Identity threat seems to be driving the rise in populism and nationalism around the world. One primary response to that threat is the growing worldwide pressure to limit immigration and to build walls. British author Tim Marshall charts the primary reason for building walls: fear. Whether designed to keep out the barbarians (China) or immigrants (U.S. and India), or to separate ethno-religious groups (Northern Ireland and Iraq), walls are generally built to reduce our anxieties. As barriers walls often prove ineffective. As symbols of protection and exclusion, however, walls can be remarkably powerful. Walls represent artifacts of our injustices and our fears. They are symptoms, not causes.

Numerous authors have identified the increasingly stratified media (“Fox News vs. MSNBC”) and polarized social media (such as affinity groups on Facebook) as the cause of polarization. Yet there is substantial evidence that the proliferation of news sources reflects increasing polarization more than it contributes to it. The primary evidence for this claim is the fact that social scientists have been tracking increasing polarization among the public since the early 1980s—well before Facebook, Twitter, or Fox News existed. The human tendency to seek out evidence supporting preexisting biases has been around for millennia. “Confirmation bias” is a well-established phenomenon that predates the rise of social media.

Perhaps one cause of modern polarization is our centuries-old “winner take all” political system. Rather than establishing a parliamentary system that apportioned representation based on the percentage of the vote obtained, the founders of the American republic designed a constitution that awards seats in Congress based purely on a majority vote in each district. Such a system, particularly given the rise of a two-party system that the founders did not anticipate, may contribute to the polarization we are now experiencing. An additional structural hypothesis is that gerrymandering is the cause of the extreme polarization that we now see in Congress. However, while gerrymandering may indeed contribute to polarization, there is little evidence that it is a primary cause. As with our polarized media, gerrymandering may be more a consequence and an accelerator of polarization than a primary cause.

While Congress was polarizing, so were American voters. Reporter Bill Bishop charts this development in The Big Sort: Why the Clustering of Like-Minded America Is Tearing Us Apart. Bishop demonstrates that after 1976, Republicans and Democrats grew more geographically segregated. Unlike many authors on polarization, Bishop blames neither politicians nor the media for our current divides. The problem is that growing homogeneity corresponds with increasing extremism, as individuals who participate in only like-minded groups tend to develop more extreme views. Bishop blames not gerrymandering but gentrification and other social trends for the increase in congressional districts primarily composed of like-minded people. As much as we would like to fault our political leaders and the media for the polarization we are now experiencing, it seems that social sorting is indeed a grass-roots phenomenon.

We have arrived at the final possible cause of our polarized era—leaders who foment polarization. Top political leaders occupy a paradoxical position. They are both contributors to and symbols of developments in their countries. Countries do not elect highly polarizing leaders unless they are in a highly polarized, or desperate, state. Venezuelans elected Hugo Chavez during an economic crisis and at a time when there were huge disparities between the rich and the poor. Filipinos elected Rodrigo Duterte in the midst of a wave of crime and corruption that they hoped he could stop. In the United States, most Trump voters felt threatened and marginalized, fearing that they were losing their place in the country and wanting to “make American great again.” Thus, the most significant contribution of leaders may be to give voice to the already felt grievances of members of the populace.

We can conclude that one route to societal polarization lies through the combination of economic inequality, identity threat, and leaders who articulate the felt grievances of those who believe they are losing out. The formula looks like this: